The Strand, a 99-year-old pub in Sydney’s Darlinghurst, is set to celebrate a new era of the roaring twenties, as it transforms into a four-level dining and hotel precinct.

With two distinct phases of the extensive refurbishment, The Strand will be home to a modern French-inspired bistro, now open, and a new boutique hotel and vibrant rooftop bar set to open in winter.

The first glimpse of the restoration is The Strand Bistro on the ground floor which draws its cues from turn-of-the-century Paris, with a modern laidback interpretation of French cuisine.

The Strand’s head chef Alex Kavanagh has designed the Bistro menu to hero seasonal Australian produce, featuring dishes such as Sydney rock oysters served with a classic French mignonette, a rich, sticky pissaladière where pastry is layered with dark caramelised onion then topped with Ortiz anchovies and olives, and Lè Bùrger Gruyere with tomato, mustard and fries. The bistro’s extensive drinks list boasts an impressive line-up of French and Australian wines, aperitifs, cocktails and beers and a 49 strong whisky list featuring a mix of Japanese, Irish and Scottish whisky.

Signature cocktails steal the show with suitably named French-inspired twists including a French Tart, a mix of vodka, elderflower liqueur and rosemary and The Charlie Chaplin, a mix of sloe gin, apricot brandy and lime juice.

“As Darlinghurst continues its evolution seen over recent years, we believe in the potential, growth and revitalisation of the local area,” Public Hospitality executive director, Peter Crinis said.

“With The Strand’s opening, we want to offer something that leans on the charm, history and character of the building and neighbourhood right on the fringe of Sydney’s bustling city, while creating something new and fresh for locals and travellers. As the experience of dining and travel continues to evolve, we are looking forward to welcoming guests to experience something truly boutique for a more intimate experience of Sydney.” 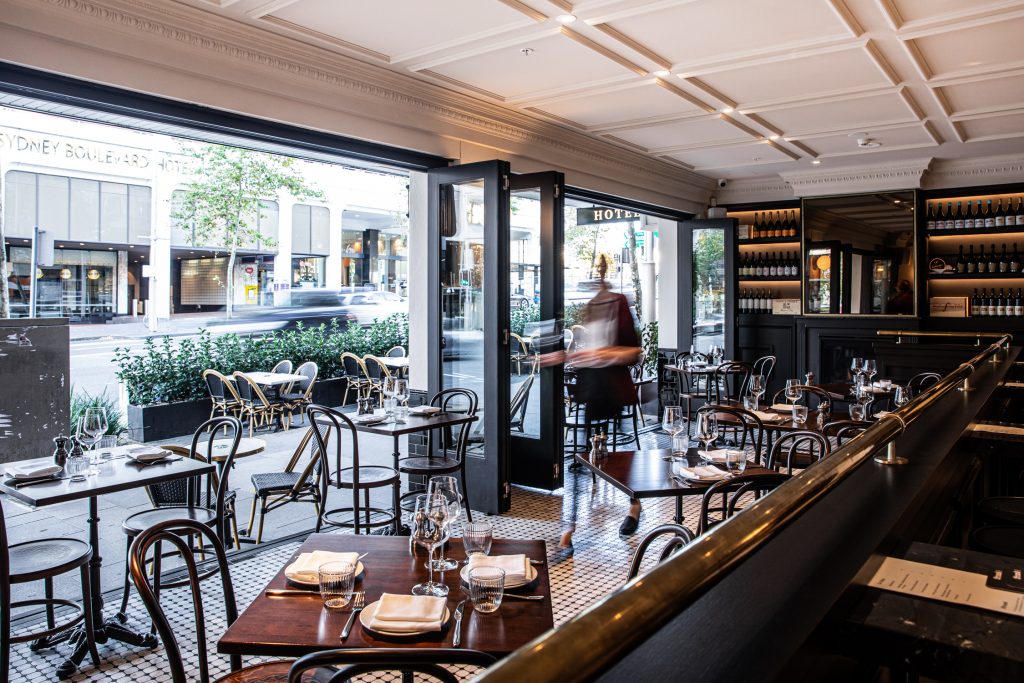 The soon-to-be-opened rooftop will add to Sydney’s burgeoning rooftop scene where crowds will be lured by the vibrant bar where more casual food and drinks will be on offer and guests can soak up the sunshine and look out over the city. As night falls, DJs will take pride of place, playing to the crowd in a space defined by its greenery, lighting and open-air communal tables.

The Strand Hotel will be a boutique refuge, nestled on the middle floors of the William Street venue featuring 17 hotel rooms, library and common work and kitchen spaces, paying homage to the iconic Potts Point locale with a contrast of distressed yet refined designer details throughout.

The Strand is the first in a series of new venues by Public Hospitality, set to open over the next year. The group is guided by a vision to uncover the potential of heritage buildings and restore them to their former glory, The Camelia Grove in Alexandria, Erskinville’s The Kurrajong and The Town Hall in Balmain to follow in the coming months.

Though it may look like the interior of a space station from 2001: A Space Oddesy, the accompanying image is in fact the lobby of this swanky new addition.

Get the inside scoop on all the trends to watch as the business events sector finds a new rhythm for 2022.