The International Congress and Convention Association (ICCA) has revealed which countries and cities held the most association meetings in 2019.

Only those meetings that meet ICCA’s stringent assessment criteria – rotating between at least three countries, have a proven attendance of at least 50 participants, and are held on a regular basis – are recorded within the global association’s annual statistics.

For cities, Paris claimed the number one spot for the second year in a row, with Lisbon and

In the number one spot for cities for the Paris for the second year in a row, followed by Lisbon, which had the highest increase in number of events (38), moving up four places from the 2018 rankings to second.

Regular top five contenders Berlin (third), Barcelona (fourth) and Madrid (fifth), made it once again, with Berlin and Madrid swapping places from the previous year’s rankings.

Sydney was the only Aussie city to make the 2019 list, scraping in at number 20.

As for the top countries, the US continued its two-decade dominance, with Germany placing second, and France moving up to take third position from Spain, which finished fourth ahead of the UK. Australia managed to secure 12th spot in the annual rankings. 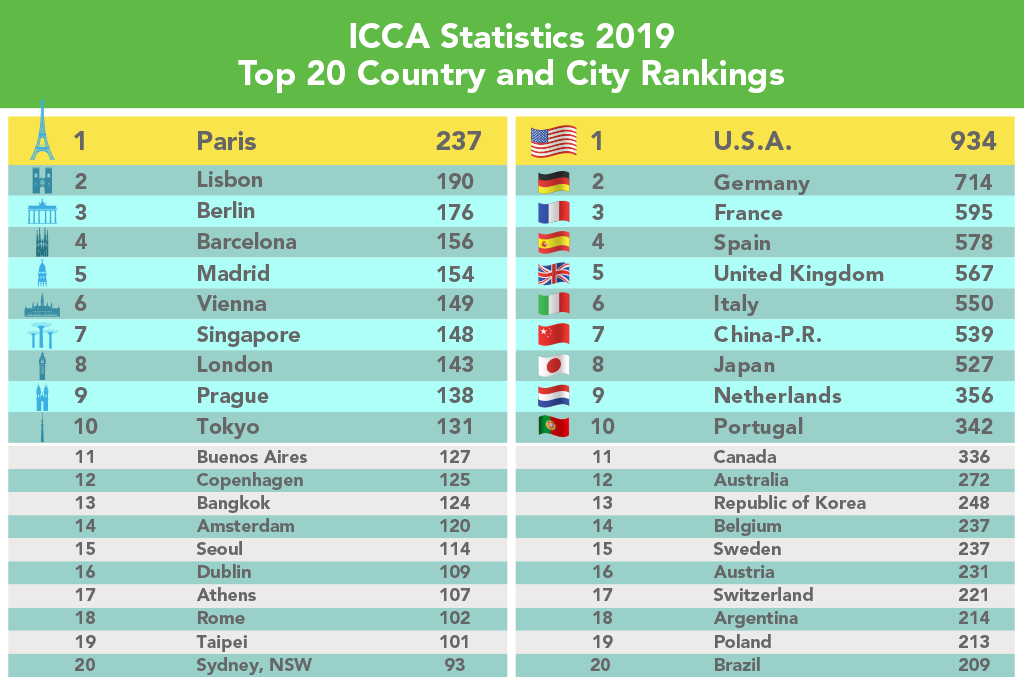 ICCA chief executive Senthil Gopinath said: “Given the current circumstances, it is great to once again highlight the consistent growth in association meetings globally.

“These figures show the need and importance of face-to-face events, and consequently that the industry will be instrumental in the global recovery when the time is right.”

The Indigenous cultural tourism venue in Cairns has been forced to close its doors due to the ongoing travel restrictions caused by the global pandemic.

With a two-way trans-Tasman travel ‘bubble’ looking set to open early next year, Business Events Industry Aotearoa is bringing back its flagship event with a bang.