Queensland announces further easing of restrictions on events and venues

The Queensland government has announced a further and faster easing of restrictions across the state from midday on Friday.

The stage three measures will allow more events, with those of more than 10,000 people requiring a COVIDSafe event plan approved by Queensland’s Chief Health Officer.

The new measures will also allow wedding attendance numbers to increase from 20 to 100, as well as increases in the number of reception attendees. Private gatherings in homes will be able to have 100 people – up from 20.

Additional venues such as casinos and food courts will be able to reopen during stage three.

Deputy Premier and Health Minister Steven Miles said the accelerated relaxation of restrictions in stage three will collectively mean a greater return to normality for all Queenslanders.

“For small businesses like restaurants and cafés, for couples getting married, for young people wanting to celebrate their 21st at home, for community sporting teams and their spectators, for sports fans, museum-goers and event managers, life has gotten easier,” he said.

“The four square metre rule per customer applies across the board with no ceiling, and no need to divide customers into smaller groups.

“For small businesses, we will relax the four square metre rule, allowing up to 50 customers for a venue below 200 square metres in size, provided they keep a register of customers.

“And patrons will be able to go to the bar to collect your food and drink, meaning faster service at many locations.”

Queensland’s borders will reopen to visitors from other states from 10 July, provided travellers complete a border declaration stating they have not been to local government areas in Victoria in the previous 14 days.

Premier Annastacia Palaszczuk said anyone who had travelled from Victoria – including Queenslanders – would be prevented from entering the state from this Friday unless they quarantined at a hotel at their own expense for two weeks.

“We have seen more than 250 cases of COVID-19 in Victoria over the past week and there is sustained community transmission there,” Queensland’s Premier said.

“We cannot risk removing our border restrictions for those people coming from areas in Victoria right now. To do so would jeopardise everything we have all sacrificed so much to achieve and could be catastrophic to our entire economy.” 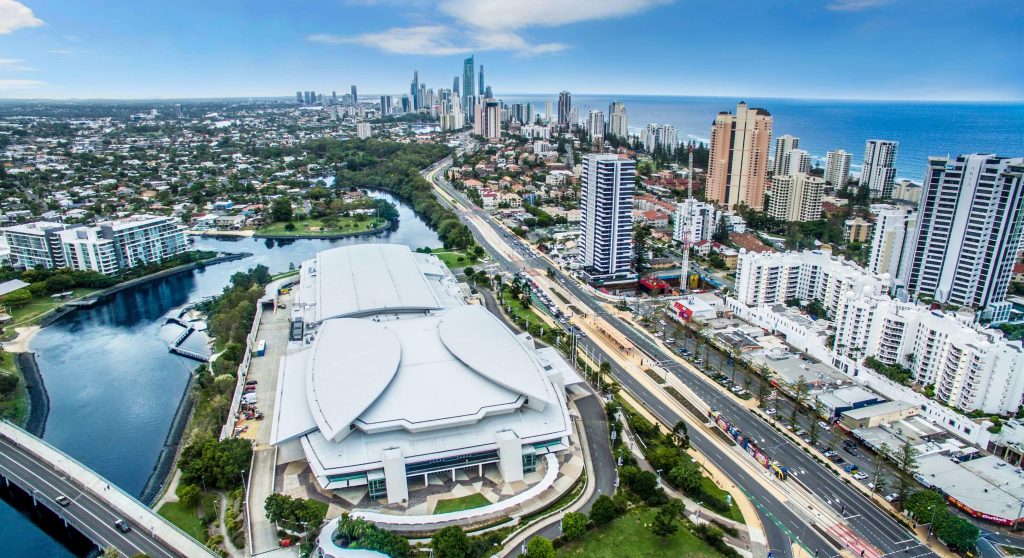 Developed in consultation with the venue’s COVIDSafe taskforce, industry bodies, government and health authorities, the plan covers all essential areas of operation including cleaning and hygiene, social distancing (with new floor plans), food and beverage service, training and record keeping.

The venue could potentially host up to 4,500 visitors per day based on one person per four square metres. The arena that would normally hold up to 6,000 now has a COVIDSafe capacity of between 1,500 and 3,000 people.

Adrienne Readings, general manager at the GCCEC, said: “We are all looking forward to welcoming business back to the centre after months of getting the building and business COVIDSafe.

“We are confident in our plan and the processes that we have implemented to ensure the safety of all visitors to GCCEC.

“We’re in a unique position on the Gold Coast to be able to accommodate larger events such as graduations, conferences, meetings and dinners adhering to current distancing regulations.”

It looks like the events industry is picking up on the Goldie with the city being named as host for the World Federation of Chiropractic Biennial Congress.

Gladys has stuck to her word, meaning most venues in Greater Sydney will soon be able to double their capacity. Yay!